With Season 12 of RuPaul’s Drag Race well underway, our staff manager Nick reviews the queens so far and speculates who’s got what it takes to go all the way! This blog post will contain spoilers for the first 3 episodes of Season 12.

Aiden is without a doubt the quirkiest queen of the bunch and I am absolutely fascinated by her drag outlook and aesthetic but I worry that the looks so far have been a little too simple for what the runway is used to. In the World’s Worst Challenge, I felt her teammates were a little too harsh on her contributions to the challenge, but to make it much further she’s definitely going to need to come out of her shell a little more! 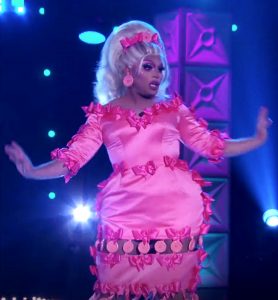 With a huge reputation to live up to, and the only queen I had heard of prior to the cast reveal, I was expecting big things from Brita. So far she’s sat somewhere in the middle for me, but I’m confident she could still rise to the top. The looks have been a little safe but it’s her personality that will carry her forward – if she allows it to shine!

Crystal is serving some serious make up this season and seems to be getting read for it –  but it worked for Trixie Mattell! Whilst her looks are a little costumey and/or unfinished, the Freddie Krueger Fall Look has been a personal highlight for me this season. She’s been advised to change up her make up but there’s a long history on the show of queens being told to change it up and then immediately going home as soon as they do – will she fall into this trap?

So Dahlia was the first queen this season to sashay away but was it deserved? Unfortunately, I think so. Her broccoli performance was a little awkward and very forgettable and though she wowed us with some brilliant spring and fall looks, her buttons and bows were very all over the place.

An early favourite as far as I’m concerned, Gigi brings both style and substance. Every look has been stunning and the personality that shone through during her rap stands her in good stead to get far – and the story of her mother making all her costumes is utterly endearing. Breaking out of the mould of other “look queens”, Gigi has already proven herself a force to be reckoned with and I can’t wait to see where she goes next! 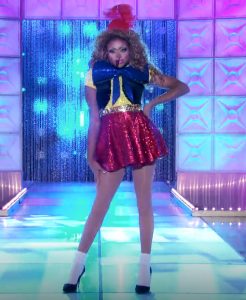 Is it just me that quite likes the humour of her name? Much better than Heidi Hoe if you ask me! Despite a very ropey sparkle look (someone fetch a watering can for that wig!), Heidi’s personality shone in the World’s Worst challenge and her Pinocchio influenced buttons and bows look stood out from the crowd. In the absence of any more thirsty wigs, this queen could go far.

Jackie has so far been a very solid player but, whilst everything has been on point, nothing has jumped out as outstanding. I think the next couple of weeks will be critical for Jackie in terms of how far she can go, but I’m still waiting for that knockout performance or outfit – and I’m just hoping Jackie’s got it up her sleeve!

The essence of beauty is reminding me very much of A’keria C. Davenport of Season 11 at present – very well put together looks and always poised, but a little reserved and held back. If she can break out like A’keria did with her twerking, she could potentially be unstoppable and take the crown. Her performance as Bad Apple showed glimmers of what could be underneath, but only time will tell!

This high energy queen has already shown us so much in terms of both looks and talents that she must be in the running to go far. Singing challenges will undoubtedly be her strength but seems very well rounded – she’s one to watch, but let’s hope that energy doesn’t lead to an early burnout! 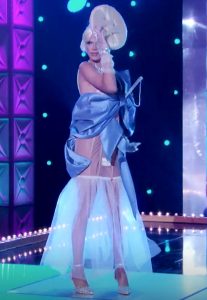 A couple more weeks and she’ll be the meme queen of the season, her handle of the English language being extremely endearing. Whilst it tripped her up during the Worlds Worst challenge, I think her place in the bottom 2 wasn’t at all deserved and I’m so glad she’s with us to bring more fierce looks! Embracing her French heritage will be key, but I hope Nicky is here for the long haul!

Although Rock’s make up is similar to Crystal she seems to wear it much better and I’m living for the campy anime fantasy that she delivers. Although her humour in her rap verse was brought into question, she seemed to plough through and deliver a solid performance in the World’s Worst challenge. She’s probably middle of the pack right now but if she can change things up enough, she could last for a while yet.

Everything Widow has done so far has quite rightly been highly received by the judges – and yet I’m struggling to connect with her? Whilst I can’t find fault with her output, the overconfidence reminds of queens from previous seasons who have built themselves up only to fall quite far down quite quickly! Hopefully, she can be a little more level headed as things progress and not get into her head about her place in the competition.