Amanda Bang – a Queen a lot of you are very familiar with and most likely have met while attending a Glitterbomb event! She has been a valued performer with us for many years and has always got a new and unique look ready to pull out for our themes. So this week we decided to get in touch with Amanda and ask her to share with us and review some of her iconic looks – Toot or Boot? 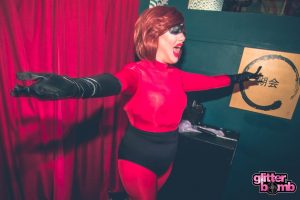 The theme for this evening was Heros and I wanted to be the thicc, iconic, mumma, Mrs Incredible. It was a fairly simple look to pull off just needing to purchase a new wig, black gloves, red bodysuit and black shiny knee high boot covers. The only thing missing from this look was the incredibles symbol for the suit but it didn’t arrive in time! CURSE YOU EBAY! Funny story is that all night my boot covers kept falling down the leg of my suit so I ended up duct taping it to my leg! The things we do for art! 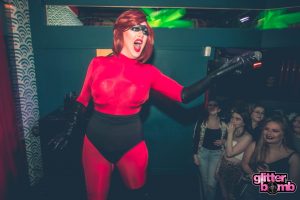 The make up actually didn’t take as long as normal because I was using a white foundation base. My normal face can take around 3 hours but this was only 2 hours. The thing that you probably can’t make out is that the cut crease of my eyes was also heart shaped but once my eyelashes were on they are hard to see! The white foundation was from my Kryolan clown white pot and, as this night was a little while ago, I don’t remember the other products I used! The wig was styled by Dexter Clift wigs who is also known as River Medway! 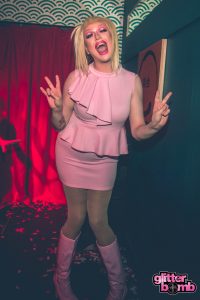 Oh we all love a good Spice Girls night! I’m old enough to remember the Spice Girls first time around (yes I’m old and what? Wanna fight ‘bout it?). Baby Spice AKA Emma Bunton was always my favourite Spice Girl growing up but I absolutely adored Geri Halliwell’s cover of It’s Raining Men. This wig has a history with me too! It’s my first human hair wig from a production of La Cage Aux Follies. I think that wig has served her time and needs to be retired as she’s more split than the Spice Girls. 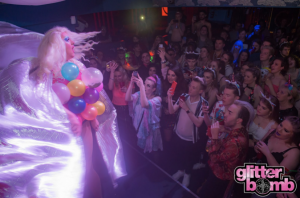 This look and performance was inspired by burlesque performances. The idea of stripping off clothes to reveal more and more skin but instead of clothes its balloons! I have since revised this performance and now do it in lingerie to really get people a little hot under the collar. 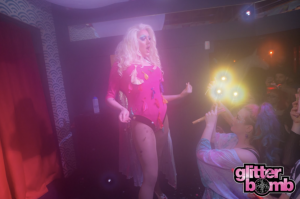 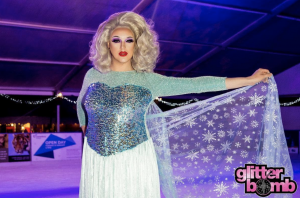 So this night we had a Glitterbomb on an ice rink! Of course being a huge Frozen fan girl I HAD to come as grandma Elsa. The reason for that is we had Charlie Hides performing at the club right after and I didn’t want her feeling too old. Not only that but when I got on the ice I had an excuse for why I was falling over – because I’m old! Terrible jokes aside I didn’t realise how hard just standing on ice is so to take this photo there’s actually a very nice, young, handsome man holding me up. 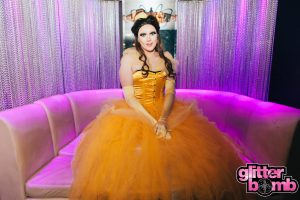 This look took some time to construct! It was a very basic no sewing skirt tutorial that my mother found online. The original tutorial was to make easy tutus but I thought LET’S MAKE A FULL ON GOWN! It took HOURS and hundreds of feet of tulle to make but as my first project I don’t think it came out all that bad! I adored wearing this look as Belle is my favorite Disney princess. Whenever I do a character like this I feel like a pound land Disneyland Employee and I’m ok with that. 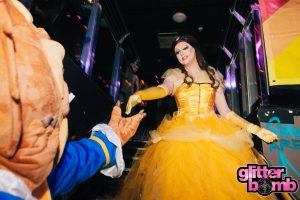 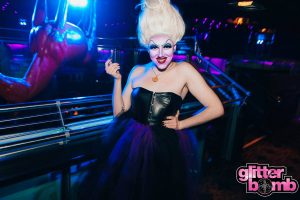 The wig for this outfit was an absolute struggle as my first wig styling project. It took hours of teasing and two whole cans of Got2B Glue hair spray! She was one solid unit of hair and chemicals! The make up was problematic as back then finding purple foundation in a rush wasn’t really going to happen. So what I did was pull out my trusty clown white makeup and pounded my face with purple eyeshadow until it looked purple enough. The skirt was made in the same way as the Belle outfit but this time I added streaks of purple to represent the tentacles. I think the challenge was trying not to sweat too much in a pleather corset. 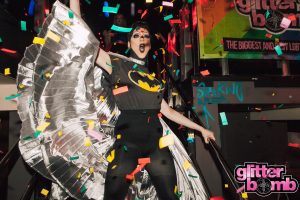 Oh no here we go with when I thought I could pull off some club kid looks. Judging by this whole look I think the most complicated part would have been rhinestoning the T-shirt. JEEZ I’m not even padded in this photo!  This was definitely a look I would rather forget or do much better now. I would probably try and make a look based on the campy Adam West Batman. 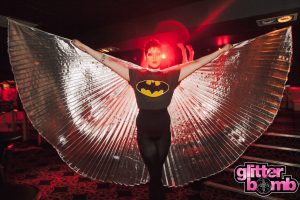 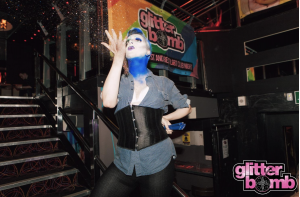 This is going really far back and it’s hard to remember all my inspirations for this look. I think the process was thinking of a character in the Wonderland world but not doing something generic like the white rabbit or Alice. Basically I thought I was being cool and edgy but looking back it’s probably more basic than anything I’ve ever done. Not going to lie, the blue neck thing was a kind of cool idea. I did that with the blue hair spray and it looked cool until it peeled off my skin like some weird exotic disease. 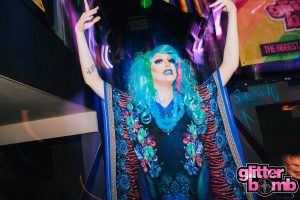 Oh damn this one is a choice… So not much to report about this look. The kaftan was from a market in Rochester and I like a lot of blue. One more time – choices! 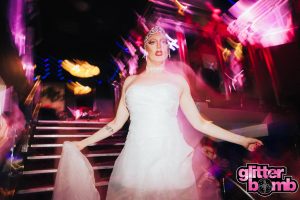 Absolutely Toot from me on this look of the Lady Gaga as The Countess from American Horror Story Hotel. I think this was one of the first times presenting as a female with no eyebrows. I felt very sexy in my white gown. I’ve never actually seen this season of American Horror Story so hard to say what I’ve done is anything but a mild nod to the source material. The only thing I sourced for this look was the headscarf as that dress I’ve had for YEARS and it’s still going. That bridle cocktail gown was probably one of my best ebay purachses. It was only £35 and it’s still going strong!

Which Bang look is your favourite?! Let us know in the comments!